What we know as “primitive camping” today was once known by another name: camping. Before RVs, electric hook-ups, flush toilets, and running water, camping was simple and straightforward. (Though it could also be less comfortable and relaxing.) Decades ago, most campsites included room to pitch a tent, a fire ring, and little else. (And even the fire ring was optional.) Camping is an activity that has changed a lot over the years, but for some people, the appeal of this type of camping hasn’t diminished. In fact, in an increasingly busy and complex world, primitive camping offers simplicity and the chance to reconnect with the outdoors.

What is primitive camping?

Today “primitive camping” usually refers to tent camping at sites that lack amenities like electricity, running water, fire rings, or picnic tables. Campgrounds—both public and private—often offer primitive campsites but they may refer to them as “tent sites.” It’s also possible to go primitive camping in areas that don’t have designated sites at all.

Backcountry camping and dispersed camping are types of primitive camping that take place in public lands or wilderness areas. State forests, national forests, national parks, and other types of public land often allow visitors to hike or drive to more remote areas where they can set up camp. (Sometimes at designated sites, sometimes not.) Each forest or park will have its own rules, so it’s best to check with rangers ahead of time so you know where and how to camp.

No matter where you camp, primitive camping usually requires you to be self-sufficient and have plans for things like food, water, fire, and trash disposal. (More on that below!)

One of the big draws of primitive camping is to go off the grid for a while. If you’re needing some peace and quiet and want to reconnect with nature, primitive camping may be the experience you’re looking for. It can also be a good way to challenge yourself and learn new outdoor skills.

Who should try primitive camping?

Everyone! Or at least, anyone who wants to do it. Because there are different types of primitive camping, you can choose your own adventure. New to camping in general? Get a tent site at a state park, national park, or private campground. Looking for more solitude—or adventure? Plan a trip to a more remote campsite that requires more effort to reach. Across the U.S. there are primitive campsites that are accessible by hiking trails, kayaks, canoes, boats, and 4-wheel-drive vehicles.

What gear do I need?

The gear you’ll need for primitive camping depends on where you plan to camp and whether you’ll be backpacking/paddling to your site or driving there. If you’re doing the former, you’ll want lightweight gear because you’ll be carrying all of it yourself.  Here are some common primitive camping items:

No matter where you camp, you’ll definitely need a shelter. If you’re hiking or paddling to your campsite, gear weight matters a lot so you’ll want to use a lightweight backpacking tent. If gear weight doesn’t matter, just choose a tent that’s weatherproof and large enough for your party. Here are some recommendations for the basics you’ll need:

Since many primitive sites don’t have picnic tables, consider bringing your own table and chairs.

Whether or not you need to bring your own toilet depends on where you’re camping. Some backcountry campgrounds and primitive sites have vault toilets. If you’re camping in a place that doesn’t have toilets, check out REI’s advice about how to go to the bathroom in the woods (or anywhere outdoors). If the “dig your own toilet” method doesn’t appeal to you (and you’re not backpacking), check out our post on how to make a DIY camping toilet.

This isn’t a gear item but just something to know when you go primitive camping. Unless you’re at a campground that offers trash disposal, you’ll have to “pack out what you pack in” and take your trash home with you. All you’ll need for this is some trash bags (that you can close and keep away from curious wildlife).

Where should I go primitive camping?

Primitive campsites aren’t hard to find. It makes the most sense to pick your geographic location first (close to home, in the mountains, in a particular state) and then research parks and campgrounds in that area. If you need some travel inspiration, here are some U.S. destinations that offers tent sites or backcountry options:

Just outside Aspen, the Maroon Bells Wilderness in the White River National Forest is usually packed with tourists during the summer season and its small campgrounds fill up quickly. No matter. If you want to see these stunning mountains but avoid the crowds, the national forest allows dispersed camping in designated areas.

Padre Island National Seashore includes 70-miles of shoreline on North Padre Island. It has three primitive campgrounds that allow you to camp right on the beach. All sites are first-come, first-serve, so be sure to have a back-up plan if you can’t snag a site.

Within Glen Canyon National Recreation Area, there are several primitive camping areas and campgrounds, including sites that let you set up camp on the shores of Lake Powell. Available amenities depend on the camping area, some have vault toilets and potable water while others don’t.

Maine’s scenic Baxter State Park covers more than 200,000 acres and include Mount Katahdin, the state’s highest peak and the end (or beginning) of the Appalachian Trail. The park has two backcountry campgrounds plus backcountry camping areas. 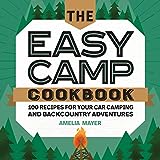 The Easy Camp Cookbook: 100 Recipes For Your Car Camping and Backcountry Adventures
Check Price on Amazon
Bestseller No. 2 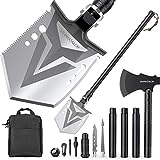